In 2019 to date, the number of transactions is trending ever upward, but large block scarcity is pushing the number of blocks traded down as prices rise.

After a slow start to 2019, the volume of IPv4 numbers traded is picking up – though still far below the peak trading periods of 2018. By this same time last year, the total quantity of numbers flowing to and from organizations in the ARIN region was just over 27 million. But 2018 was the most active year ever in the IPv4 market. This year is not shaping up to be as active. In 2019 (through July), just over 17.5 million numbers have transferred – representing a 35% decline from last year over the same time period.

The high volumes in 2018 were the result of an increased supply of large blocks entering the market. Between 2017 and 2018, there were double the number transactions and a more than 15% increase in volume of IPv4 addresses sold in the large block market, most of which occurred in Q3 2018, when the second highest quantity of IPv4 numbers were traded in any quarterly period. The two quarters that followed, however, were the quietest in the history of the market as a result of limited supply rather than constrained demand. There were no large block transfers during this period.

The large-block scarcity in Q4 2018 and Q1 2019 pushed prices up considerably. These rising prices shook loose some additional large-block supply and produced a handful of large block transactions in Q2 of this year.

Although the volume of numbers traded has declined from last year, the total number of transactions is still trending upward, as it has year after year. This upward trend is attributable to continuing growth in small blocks transactions. In the first two quarters of 2019, over 75% of transactions involve trades of fewer than 4,000 IPv4 numbers. This reflects growth of 6% compared to the first half of 2018.

To date, the 2019 inter-RIR market has had no large block transactions but there have been a steady stream of small and medium block trades. Also there has been big news in the international market. LACNIC recently ratified a policy that will permit inter-RIR transactions.  And there is an inter-RIR transfer policy proposal under consideration in AFRINIC.

The current IPv4 market for /17 and larger blocks is consolidating around the trading activity of just a few buyers. In 2016, for example, there were approximately 30 buyers of nearly 80 /16 blocks traded; 95% of those blocks were sold outside of large block transactions to small and mid-block buyers (i.e., buyers purchasing fewer than 1MM numbers). Since then, the number of /16 blocks entering the market has increased - in the first half of 2019, over 100 /16s were sold - but the number of buyers and percentage of blocks traded outside of large block transactions has declined substantially. There were only 9 buyers altogether with less than 10% of the blocks sold to buyers picking up fewer than three /16s. 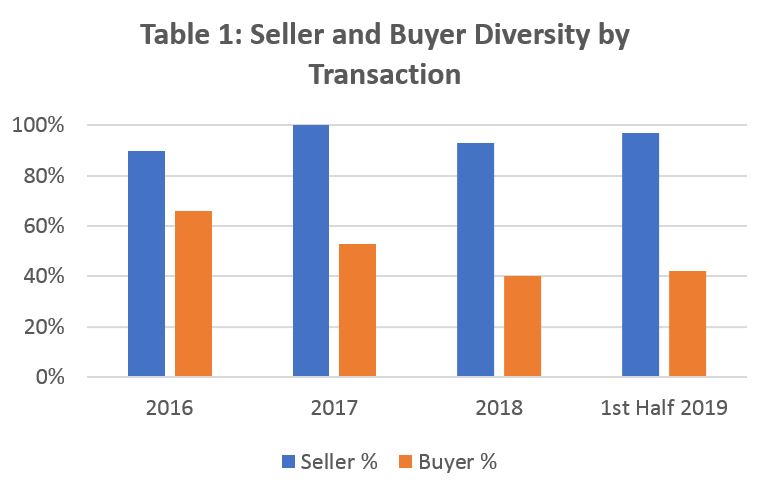 Demand for address space remains high, and supplies are constrained.   These factors are exerting upward pricing pressure. But at the same time, sophisticated buyers are looking for ways to use their leverage to relieve that pressure.  In this climate, sellers need real-time pricing intelligence, effective bid processes, and experienced transaction guidance to help ensure they are closing deals that maximize the value of their address space.

Worldwide end user adoption hit an all-time high of nearly 29% in June 2019 according to Google IPv6 statistics. See https://www.google.com/intl/en/ipv6/statistics.html.  This represented a nearly 3 percentage point increase since January. This is slightly better than the rate of progress made during the same time period last year, but in line with global adoption rates in prior years.

By the end of Q2 2019, global user connectivity ranged between 25% (on weekdays) to around 29% (on weekends).  Over the last two months in Q2, there was some upward progress in the U.S., but the adoption rates in the U.S. remains a few percentage points shy of its peak in late 2018 when adoption hit 40%.

There continues to be little progress in the number of websites reachable over IPv6.  According Alexa Top 1000 statistics, at the end of July 25% of websites were reachable over v6, which reflects no improvement over the last two years.

As in the past, there is no evidence that IPv6 is replacing IPv4 as the dominant protocol for Internet routing or that the migration to IPv6 has had any material impact on the IPv4 market.  Based on the current status of IPv6 adoption, we expect nothing to change in this regard for the remainder of 2019.