Transfers into and out of the RIPE region have contributed to this uptick.  In the first 3 months following RIPE NCC’s implementation of its policy permitting interRIR transfers, there were 3 total transactions.  In the 6 months that followed, there have been 20 transactions.

In our Annual State of the Market report, we predicted that while the volume of transfers would climb in 2016, the volume of numbers transferred would fall. The data for the first half of 2016 bears this out as demonstrated by the table below. 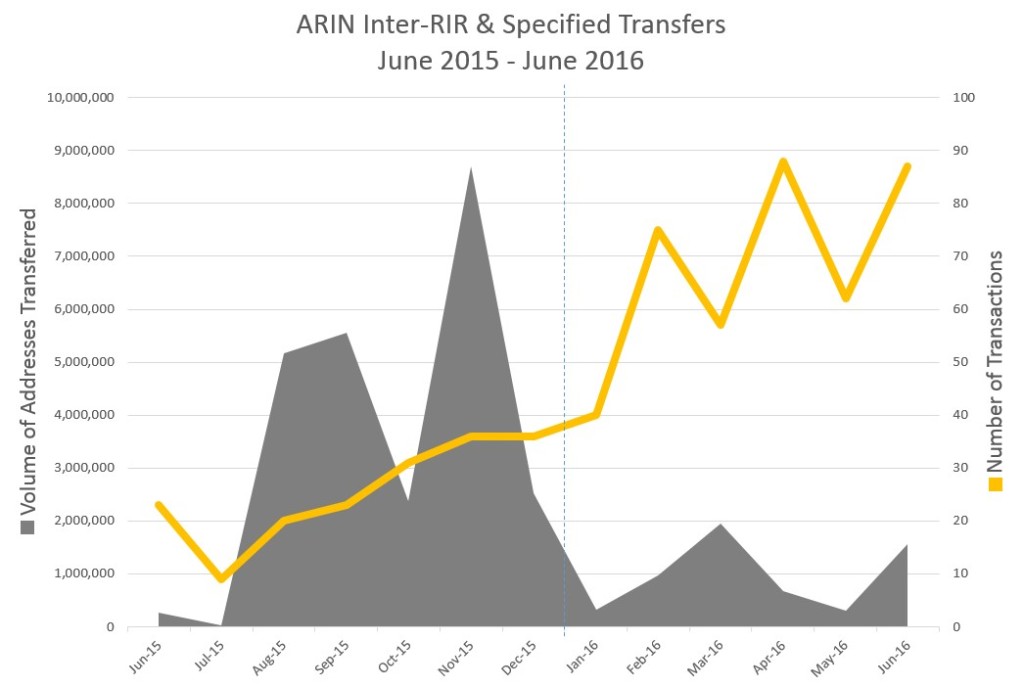 This decline is likely attributable to a tightening of available supply across the globe.  Much of the easily transferable “low hanging fruit” was picked up in 2014 and 2015, and although there remain large blocks of unadvertised IPv4 numbers, many of those blocks are not immediately available due to internal usage by current block holders.   As prices rise, however, we expect to see increased interest by legacy holders in making the investment needed to free up that space.

/24s continue to be the most prevalent block size transferred.   In 2015, 69 /24 blocks transferred within or from ARIN.   By the end of Q2 2016, this number had already doubled to 139 /24 transfers.  In the larger blocks, however, the /16 dominates, appealing both to buyers who seek small blocks but are willing to invest in excess capacity, as well as those looking for larger blocks but willing to buy in smaller increments.   In the first half of 2016, there were nearly as many /16 transfers as in all of 2015.

A variety of transfer and IPv4 related policy proposals have been issued this year, with no indication yet as to whether they have sufficient support for adoption.  At least one policy focuses generally on needs basis for transfers.  In late June, ARIN proposal 2016-5– “Post-IPv4-Free-Pool-Depletion Transfer Policy” – was submitted to the ARIN community for discussion.  The key change presented by 2016-5 is the relaxation of the current needs requirement applicable to organizations receiving a transfer: Currently buyers must demonstrate 100% utilization of the transferred block over 24 months.  The draft policy requires documentation showing 50% utilization over 24 months attested to by an officer of the recipient organization.  With this reduced needs requirement, however, comes an additional condition: the transferee must show efficient utilization of at least 50% of every currently assigned/allocated block.

Although this proposal presents an improvement to current transfer policy – and any improvement is better than none – in a post-free pool world, these types of needs requirements are still far too intrusive and ultimately unwarranted.   The only means of obtaining any sizable number of IPv4 addresses is through the marketplace.  The acquisition and transaction costs associated with participating in the marketplace provide a more reliable and authentic deterrent to inefficient use of transferred numbers than any needs policy-based need requirements.

Block prices inched up in Q2 2016 and – for larger blocks – have begun to converge.

At the end of 2015, there were 3 distinct pricing tiers: small blocks (< 4,000 numbers), mid-size blocks (65K – 135K numbers) and large blocks (>1M).  Currently, small block pricing is comfortably in the $12 range approaching $13.  The real story is mid-block and large-block pricing.  Six months ago, pricing was inversely proportional to the size of the block, with /16s selling for more per number than a /12.   With the high demand of /16s and the low supply of available large blocks, the per number prices for mid- and large- blocks – have converged in the $8.00 to $9.00 range – with considerable upward pricing pressure likely to drive prices higher before year end.

All other data we track suggest similar measured progress:  Although a few entities have skyrocketing IPv6 deployment, such as Sky UK Ltd.  and South Korean wireless operator SK Telecom, a majority of larger companies actively deploying v6 increased deployment by single digit percentages in the first half of 2016.  Alexa top 1000 websites reachable over IPv6 have climbed about 2% since the beginning of the year.   The 19 countries worldwide that had IPv6 deployment exceeding 5% at the beginning of 2016 have been joined by only 3 other countries in the last 6 months.   The Vyncke analysis on IPv6 enabled browsers worldwide maintains its earlier projections – IPv6 enabled browsers will hit 50% deployment in August 2021 (recovering slightly from projections at the end of Q1).

While network operators are making good strides in broadening their deployment of IPv6, there is still no evidence that IPv6 is close to supplanting IPv4 as the dominant protocol for Internet routing, and there is no evidence that IPv6 is adversely impacting the IPv4 market or vice versa.  This could change, however, if the market shortage of IPv4 address space supply continues over the next 12 months, which could prompt some network operators to accelerate their v6 migration plans.

Our own findings and public IPv6 deployment reports show that IPv6 has made significant strides since 2012, when global IPv6 deployment was still at just 1%.   Nevertheless, the demand for IPv4 remains strong with no indication of material abatement in 2016.  As one Computerworld article notes, “most experts expect IPv4 to stay in the picture for the foreseeable future” and that network operators “can expect to live in a dual-stack world for quite a while yet.”