Busy IPv4 trading continued through Q3 2016 with evidence of larger blocks starting to reappear in the marketplace. The global market continues to accelerate. 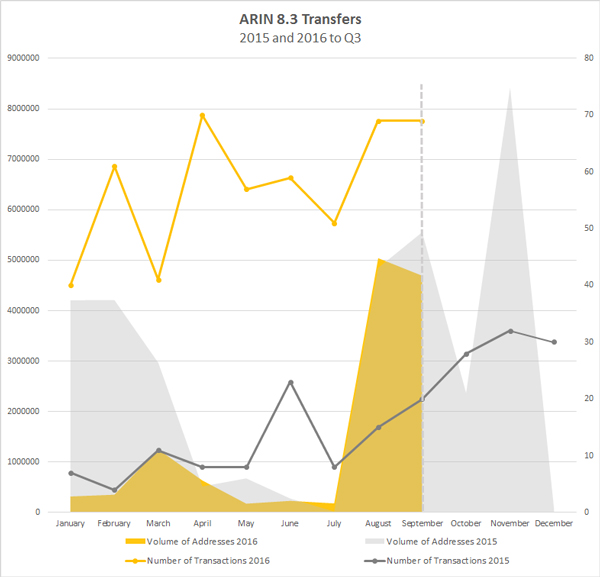 Last year the bulk of numbers transferred was due to a small number of high-volume transactions involving a handful of buyers. We’re seeing the same in 2016; however, unlike in 2015, most of that activity has occurred in the latter half of the year with a few larger blocks starting to make their way into the market.

Pricing
There has been significant movement in pricing of /16s and larger blocks. At this time last year, /16s were selling at around $6.00 - $6.50 per number and large blocks were starting to creep toward $6 after hovering at the low $4 range. Due to increased demand and less easily available supply, prices are converging around $9- $10/number with the suggestion of higher prices to come.

IPv6 Deployment
Worldwide global native IPv6 connectivity hit 14% on October 1 with weekday connectivity in the 11-12% range. In our mid-year report we indicated that 15% deployment by year-end was a more likely outcome than our 2015 Annual IPv4 Market Report prediction. That’s looking to be the case – although that number might hit close to 16%.

We’ve now added 3 more countries to the “5% club” for IPv6 deployment – Australia, India, and most recently, Austria. There’s a good chance we’ll be adding Hungary, Saudi Arabia, South Korea, Vietnam and Zimbabwe (the first African nation) by the close of 2016. In terms of our existing club members, progress is a bit all over the map. Most are making slow but steady progress. A few others haven’t moved the needle much at all in the last few months. Even the U.S. appears a bit sluggish, hovering in the 28%-29% range all quarter. The Vyncke analysis continues to project that IPv6-enabled browsers will hit 50% deployment in August 2021. The Alexa top 1000 websites reachable over IPv6 climbed another 1% over last quarter, finally hitting 20% on October 12.

News
This time last year, the trade press was going wild over ARIN’s dwindling free pool supply. This year things are much quieter. Most articles address the challenges and benefits of IPv6 deployment. Of note, Geoff Huston’s report examining IPv6 performance finds connection failure is still a challenge for IPv6. An analysis of the commercial aspects of IPv6 adoption by a RIPE technical advisor continues to support a strong business case for IPv4. The NTIA issued a request for comment on the costs, benefits and challenges of IPv6 in order to help guide future efforts on IPv6 promotion. Two days earlier, NTIA announced that it would (finally) let the IANA functions contract expire as of October 1, thus completing the process of transferring the IANA functions to the Internet multistakeholder communities.