With strong performances across all market segments, the third quarter of 2018 demonstrated that there is still a voracious appetite for IPv4 numbers.

At the end of the third quarter this year, the number of IPv4 transactions and volume of IP addresses traded in the ARIN market surpassed third-quarter totals for all prior years. An additional 18 million numbers were transferred in Q3, putting the total for the year at nearly 42 million numbers, a more than 160% jump compared to this same time last year. See Table 1. 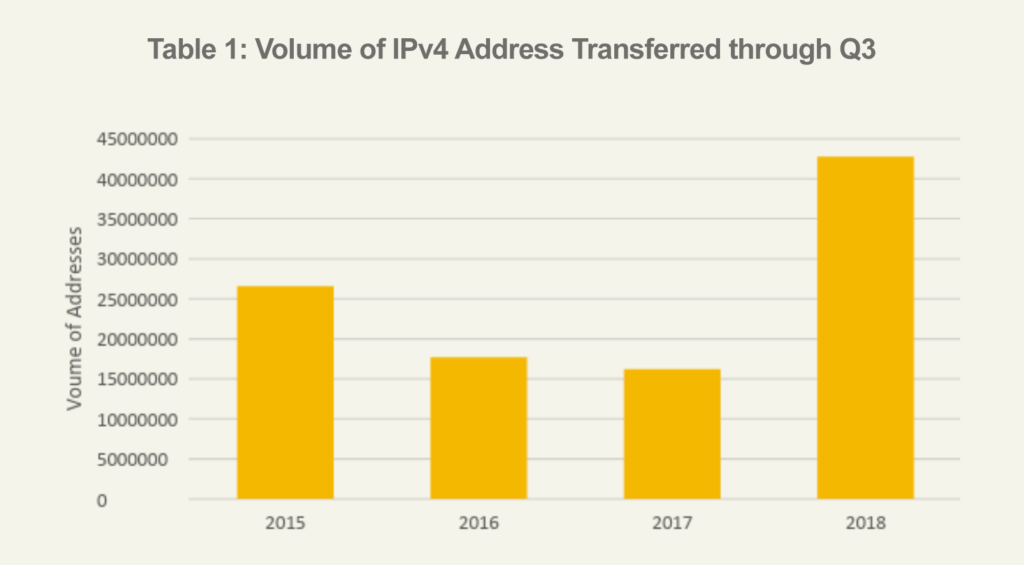 The high volumes over the last 12 months — Q4 2017 and Q2 and Q3 2018 produced the largest numbers of transferred numbers per quarter in the history of the ARIN market — are the result of the continued influx of large block supply stimulated by dramatically rising unit prices for large blocks. Approximately 88% of IPv4 addresses traded in Q3 were the result of a small number of very large block transactions (>1M addresses).

The rise in transactions was not nearly so significant — especially compared to prior years (see Table 2). There was an increase of just over 10% compared to the number of transactions this time last year, which still reflects healthy growth trends.

We noted in our mid-year report that the inter-RIR market appeared to be recovering from a lackluster performance the prior year. Close to 7 million numbers have transferred between ARIN and APNIC or RIPE NCC so far in 2018. In Q3 2018, however, the numbers were less than impressive, with fewer than 500,000 addresses transferred — the lowest volume of IPv4 addresses transferred into or out of the ARIN region since Q3 2015. See Table 3. 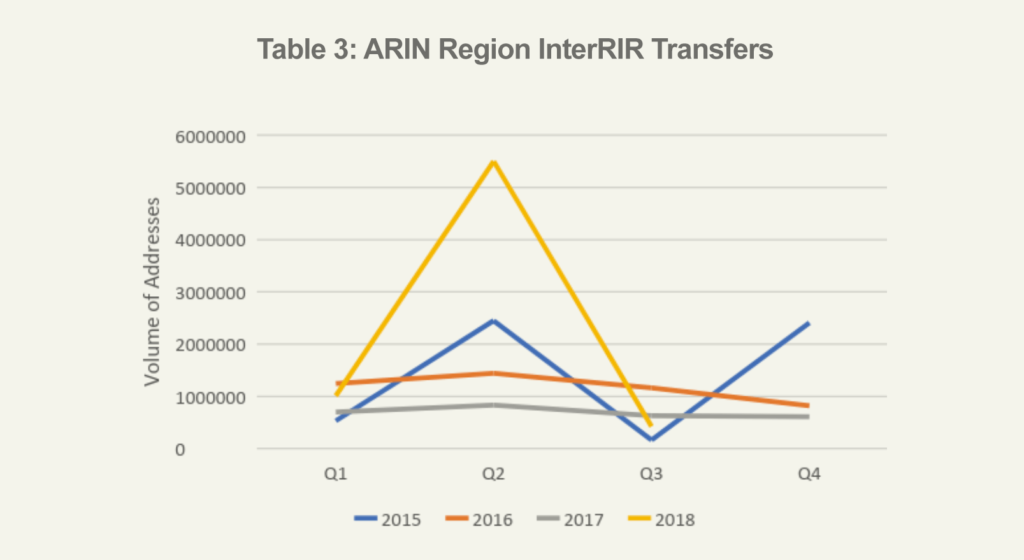 The Resurgence of the /16 Block

Block Prices Still on the Rise

We expect block prices to continue to rise over the next 6-12 months. Nearly all block sizes are north of $17 / number at this point with larger blocks leading the way with prices reaching and occasionally exceeding $20 / number. These leading unit prices for large blocks are the result of fierce competition among large block buyers.

Adoption rates in the U.S. (based on Google user stats) fell after the beginning of the year and have yet to recover. Predictive models now suggest that U.S. adoption will not hit the 50% mark until closer to 2020. Globally, progress has been steady but slow. By the end of Q2 2018, user connectivity was ranging from around 20% to 21.5% during weekdays to an average of 23.75% during weekends. At the end of Q3, the weekday numbers had not made much progress but weekend use was peaking closer to 25%.

This user data confirms that IPv4 continues to dominate as the prevailing Internet protocol. As evidenced by the record transaction numbers, IPv6 adoption is not meaningfully dampening market activity so far this year.